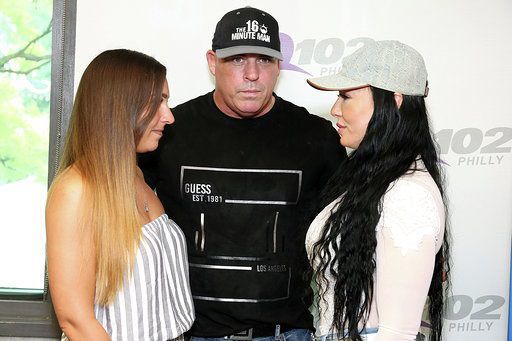 What’s more fun than watching two people pound each other in the face till one of them is physically unconscious? Not much, but if those two people should be celebrities of any caliber, the entertainment value goes way up. That, in a nutshell, is the entire concept behind Celebrity Boxing 68, an evening that features vaguely recognizable Z-listers throwing fists in a desperate attempt to come out on top. This part comedy/part sports event comes to Showboat Hotel 7 p.m. Saturday, June 8. The card features a bout between “Mob Wives” star Natalie DiDonato and Q102’s Rach on the Radio, as well as a main event matchup between Thomas Markle Jr. (half-brother to Duchess of Sussex Meghan Markle) and Henry “Nacho” Laun of TV’s “The Wahlburgers.” Here are a few things to know before you go.

1 Don’t expect Brad Pitt. In the world of celebrity boxing the definition of the term “celebrity” is given a lot of leeway. So chances are you will never see Jennifer Lawrence, Bradley Cooper or any other A-listers on the card, but that’s OK. Part of the fun is seeing who they dug up out of the tabloids to throw on a pair of gloves and duke it out in the ring. Think reality TV stars, forgotten former child actors and others grasping for that that last flicker of the limelight. “I like to give celebs their extra minute of fame,” says Damon Feldman, the man behind Celebrity Boxing. “So instead of the usual 15 minutes, this event will give them a chance to get to 16.”

2 You may be surprised at the talent. While these fights are not likely to be on the level of a Frasier/Ali or even a Tyson/Holyfield, not all of the celebs in celebrity boxing are clueless chumps when it comes to throwing fists. Stars like Danny Bonaduce and Vai Sickahema all left crowds stunned with their abilities to both throw and take punches during their fights at Celebrity Boxing. Who should you be seeing at this event? “I’d keep an eye out for ‘Mob Wife’ Natalie DiDonato and Rach on the Radio from Q102. Two beautiful girls — now that’s a highlight no matter what,” Feldman says.

3 You may be surprised at the lack of talent. While many of the stars that hop in the ring for celebrity boxing have a relatively athletic background, boxing takes equal parts strength, speed, finesse and the ability to knock someone on their ass. In other words, you can’t fake it and be too convincing. Many of the celebs at this event will likely throw poorly timed haymakers in a desperate attempt to land a lucky punch. Expect many to be gassed early on (oops — we forgot to mention stamina is also one of the key factors that goes into being a successful fighter) and to look absolutely out of their comfort zone.

The main event at Celebrity Boxing 68 will have a direct tie in to the British Royal Family.

Thomas Markle Jr., half-brother to Duchess of Sussex Meghan Markle, will get into the ring to fight Henry “Nacho” Laun of TV’s “The Wahlburgers.”

Markle, who is currently and quite famously estranged from his half-sibling, does not have any boxing experience. But he left his home in Oregon to do some training outside of Philadelphia with Celebrity Boxing promoter and former boxer Damon Feldman, aka the “Jewish Rocky.”

Training has been difficult for Markle, who does admit to having “some experience” with knocking people out, partly due to a persistent cold and partly due to a “transitional period” presently happening in his life.

“I’m on the road of hard knocks,” Markle says. “(With) the media and Meghan Markle … I guess it’s due to what I’ve dealt with and have to deal with now. It’s just sort of a difficult period. It’s … going from a private life to having your life spotlighted in the media. It’s thrown quite a few curves. It’s an adjustment period.”

He doesn’t exactly seem to shy away from any kind of affiliation with his royal in-laws, however. For the boxing match, Markle even dubbed himself the nickname “The Duke,” an obvious nod to his brother-in-law Prince Harry. He said the nickname “naturally fell into place and sort of stuck.”

Markle has no intention of jetting over to England while on the East Coast to pop in on his sister, brother-in-law and new nephew Archie.

“That ball is not in my court — that has to come from Meghan herself. She’s the one who has to break the silence and acknowledge her family … I mean, she would have to reach out to her family here in America,” says Markle, who claims that neither he, nor his father Thomas Markle Sr. or sister Samantha Markle, can pinpoint exactly what caused the rift between Meghan and them.

This Celebrity Boxing match, though, is something that Markle hopes will help break the ice with his sister and potentially reunite them, as well as provide him a chance to meet little Archie.

“A good point to this is … maybe the Celebrity Boxing match will open her eyes and let her know that we are still here,” Markle wishes. “If I dedicate the fight to her and baby Archie, maybe he can have a role model (in me) to look up to for the rest of this life.”