‘The Hunt’ is a great bit of dark fun that doesn’t take itself too seriously. 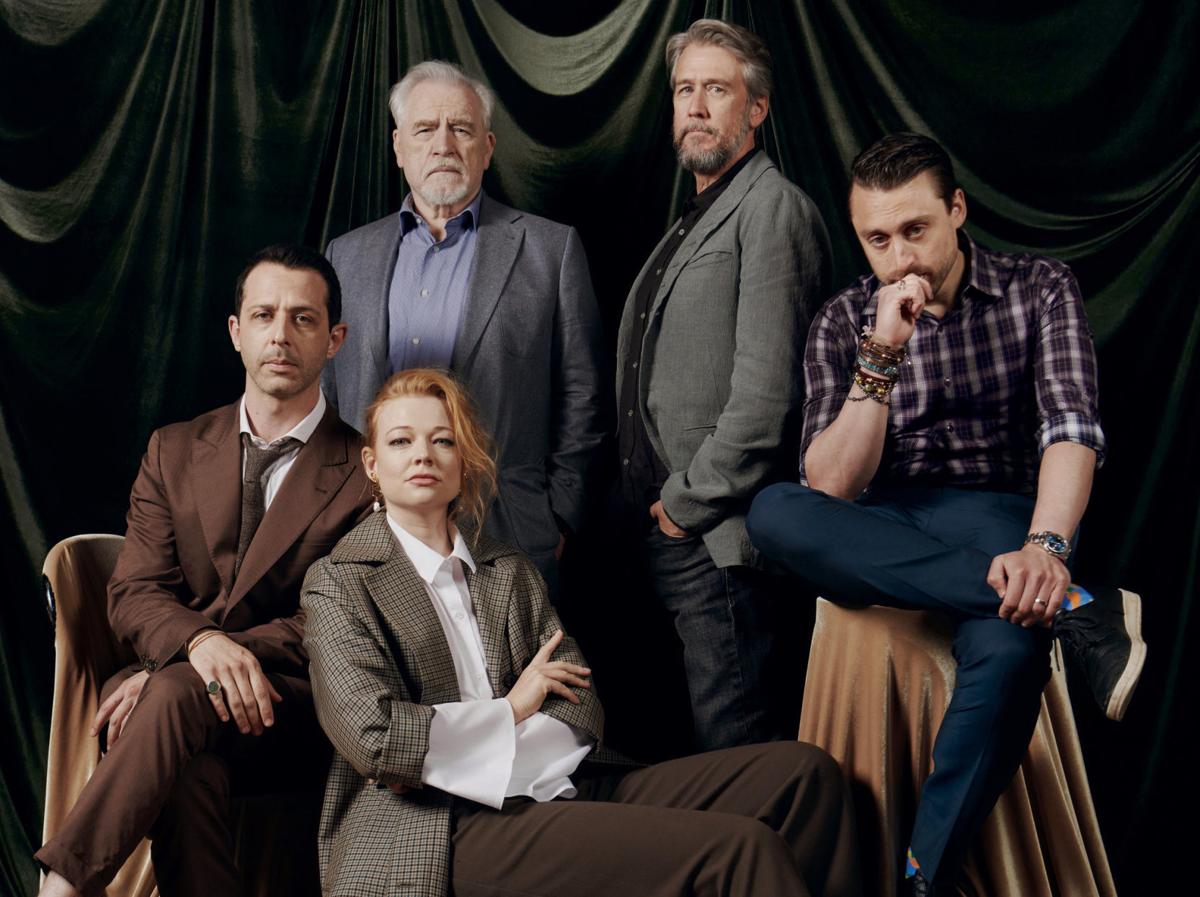 Succession makes for a slow burn, but its payoff is well worth the effort. 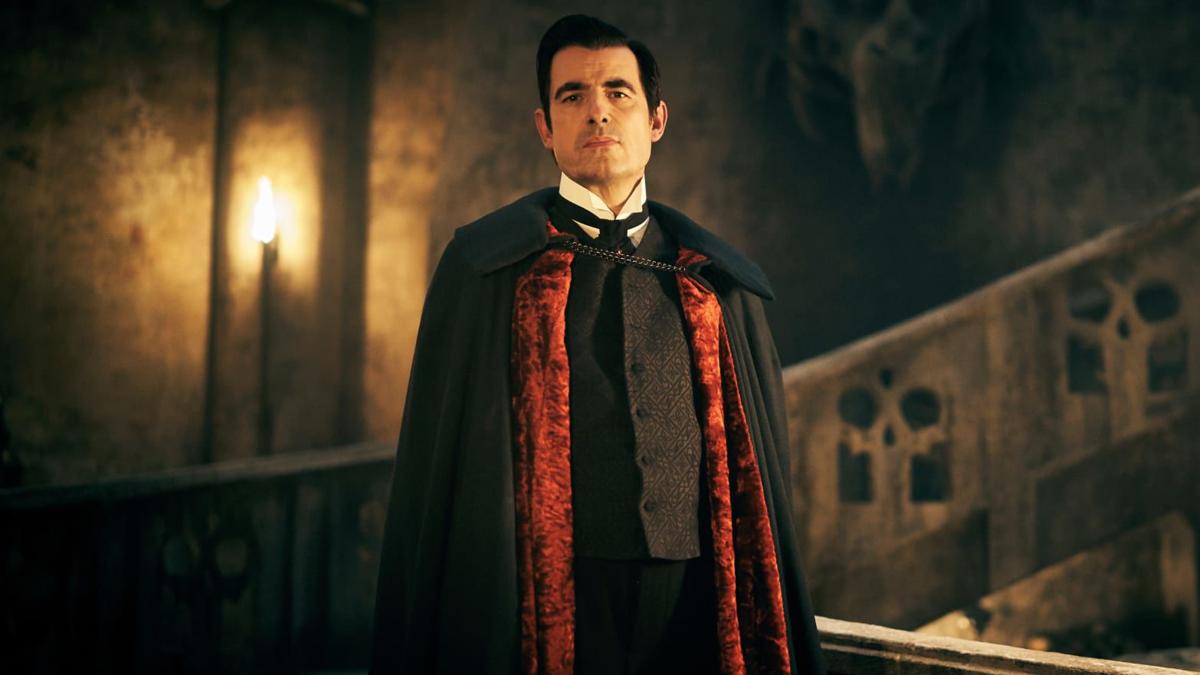 ‘Dracula’ may be yet another telling of an often told story, however this collaboration between the BBC and Netflix manages to keep things fresh and scary. 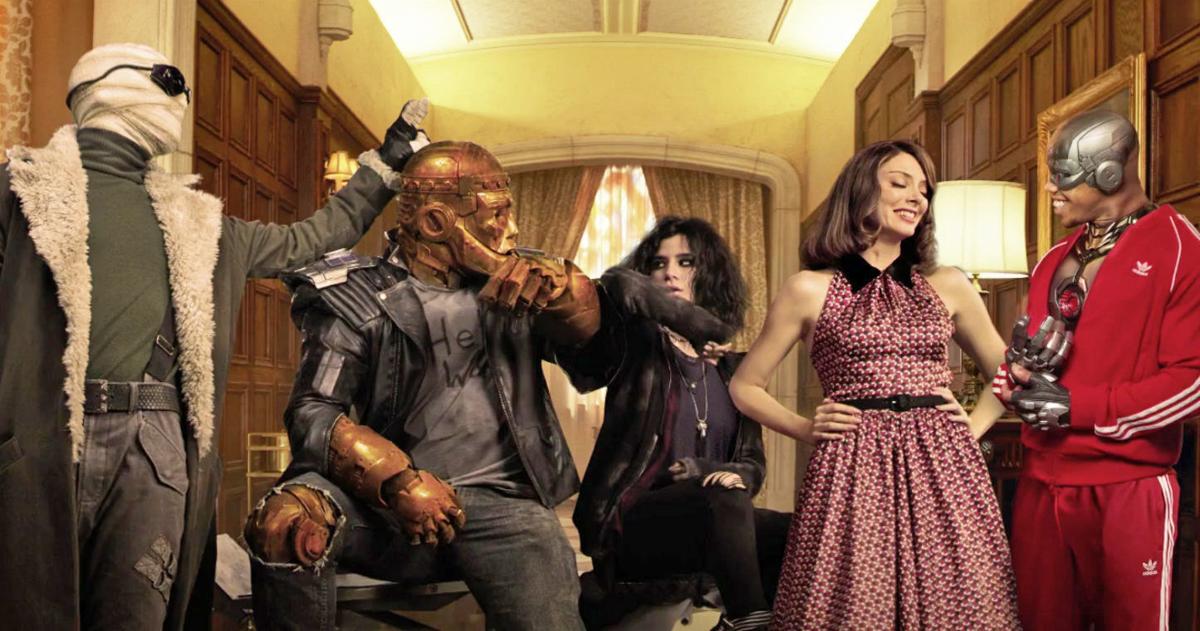 A group of dysfunctional heroes lead the charge on ‘Doom Patrol.’ 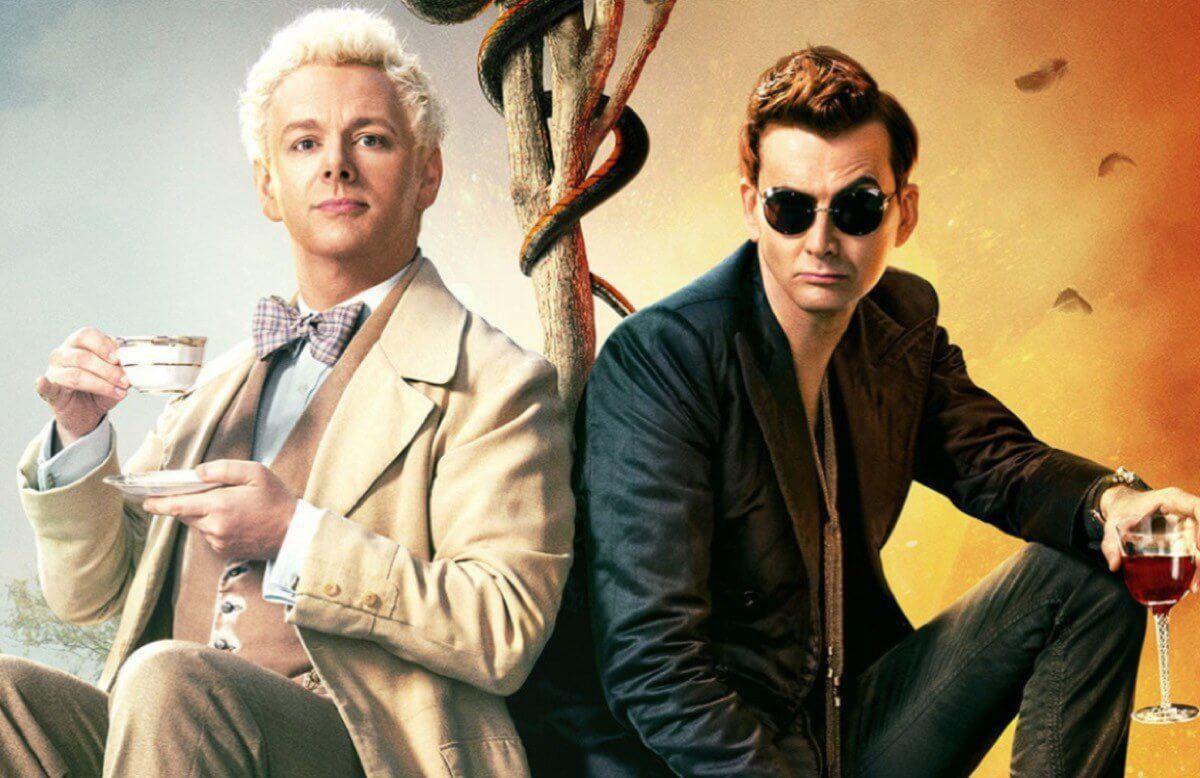 While ‘Good Omens’ seemed like a good concept, the series ultimately falls flat.

‘The Hunt’ is a great bit of dark fun that doesn’t take itself too seriously.

Succession makes for a slow burn, but its payoff is well worth the effort.

‘Dracula’ may be yet another telling of an often told story, however this collaboration between the BBC and Netflix manages to keep things fresh and scary.

A group of dysfunctional heroes lead the charge on ‘Doom Patrol.’

While ‘Good Omens’ seemed like a good concept, the series ultimately falls flat.

In this edition of Cronick’s Couch, I catch up on the greatness of “Succession,” offer a mind-numbing treat with “The Hunt,” delve into the quirkiness of “Doom Patrol,” sink my teeth into “Dracula” and hope “Good Omens” and Apple TV+’s “The Morning Show” can live up to lofty expectations.

The Hunt (Rated R, 2020, 115 minutes, available for paid streaming on any device) – One of the movies to get an early release to streaming platforms because of the coronavirus, “The Hunt” is that perfect, take-your-mind-off things, turn-off-your-brain flick that is equally absurd as it is entertaining.

Going into a movie with no expectations certainly helps, but “The Hunt” will exceed your expectations, even if you had some.

The story has been done before, but with a different twist. This time, 12 strangers wake up to find that they are being hunted by other people. They soon realize that their common denominator is that they are all right-wing conservatives and eventually realize their hunters are left-wing elitist nutjobs. While most of the hunted meet their quick demise – adios to quick but fun turns by Ike Barinholtz (“Blockers”), Emma Roberts (“American Horror Story”) and Glenn Howerton (“It’s Always Sunny in Philadelphia”) – the tides turn thanks to Betty Gilpin (“Glow”), a former member of the military who takes her gun rights very seriously. It ends with an amazing showdown between her and the hunt’s puppetmaster Hilary Swank, a two-time Oscar winner who certainly knows she’s better than this movie but has a helluva lot of fun anyway.

And that’s why “The Hunt” works. Director Craig Zobel, whose most acclaimed work comes from HBO’s “Westworld” and “The Leftovers” never lets the movie take itself too seriously. It’s a dark comedy in an over-politicized world that is divided more than ever. The movie also doesn’t take sides, injects plenty of humor and lots of ultraviolence to emerge as a surprise light treat during a heavy crisis that is just what the doctor ordered and may emerge over time as a cult favorite.

Succession (HBO, 2020, Seasons 1 and 2, 20 episodes) – HBO arguably remains the best pay-cable service thanks to its constant supply of original content that is only challenged by FX in terms of consistently amazing content.

As soon as HBO loses a network staple like “Game of Thrones” it seems to have five other series ready to take the throne, whether it be “Westworld,” “True Detective” or “The Watchmen.”

Near the top of the heap is “Succession,” an Emmy and Golden Globe powerhouse and critical darling that redefines the phrase “dysfunctional family.”

Is “Succession” a comedy, a drama, a satire? It’s all of the above. Series creator Jesse Armstrong has assembled a tremendous cast – a mix of familiar faces (Brian Cox, Kieran Culkin, Alan Ruck) and relative unknowns – that creates the Roy family, some of the most despicable, greedy, amoral, selfish, intelligent, dimwitted antiheroes ever assembled on television or in the movies.

The first season is a slow burn, something you have to stick with and endure for about five episodes before things start clicking. But it’s an investment worth making as you learn who these terrible people are, including Cox (“The Bourne Identity,” “Manhunter”), the family patriarch and genius founder of Waystar Royco, a media and entertainment empire; Jeremy Strong (“Zero Dark Thirty”) as Kendall, the natural successor to Logan, a drug addict and power-hungry betrayer who is not as smart as he thinks he is; Kieran Culkin (“Igby Goes Down”), as the youngest son Roman, a vile human who cares about sex, drugs and rock ’n’ roll more than business, even though he wants a piece of that, too; Alan Ruck (“Ferris Bueller’s Day Off”) as the eldest and most useless sibling who decides he wants to run for President; Sarah Snook as Siobhan or “Shiv” as they call her, the youngest and only daughter who may be the most intelligent of the bunch but is more interested in politics than running the family biz; Matthew Macfayden as Tom Wambsgans, the most enjoyable character of the show thanks to his immature humor and seemly good heart in the middle of evil; and the enjoyable Nicholas Braun (“Red State”) as the goofy, underestimated Greg.

“Succession” is often compared to Showtime’s entertaining “Billions,” but “Succession” is a much better written and acted show than “Billions” and focuses more on the personalities of the cast than the actual art of the deal, which “Billions” focuses on.

Season 2 kicks things up about five notches as things get more cruel, more vicious and never takes its foot off the gas pedal, winning the Outstanding Drama Series Emmy for a good reason. Somehow, the brilliance of “Succession” is that you find empathy for these heartless monsters.

Because of the slow setup, I give Season 1 a B followed by an A for the much-improved second season to give an overall grade of:

Dracula (Netflix, 2020, three episodes) – While there are undoubtedly too many unnecessary takes on the Dracula legend, this three-episode miniseries – a collaboration between the BBC and Netflix – is certainly worth sticking your fangs into.

The brilliance of this version is its decision to borrow heavily from Bram Stoker’s tale while injecting originality throughout. Like the novel, “Dracula” follows Jonathan Harker (John Hefferman) as he arrives at the Transylvania castle of Count Dracula to finalize a real estate deal. Before you know it, Harker becomes the vampire’s victim and discovers he is not alone in the castle.

In the second episodes, Dracula travels by boat to London, where he preys on the ship’s passengers, but things really take a turn in the third episode, where Dracula does make it to London, but in modern times.

The twists and originality include Dracula’s interesting castle inhabitants; Harker’s “escape” to a nunnery where he is interviewed thoroughly by a nun, who happens to be this version’s Van Helsing; Renfield serving as Dracula’s modern-day lawyer; and explanations and surprises about the “facts and fallacies” of Dracula’s legend.

It’s a career defining role for Claes Bang, one of the best incarnations of Dracula ever. He’s perfectly sexy, horrifying, suave, intelligent and humorous.

The production is first-rate, the violence is gory, the special effects impressive, the acting quite good and the overall story fantastic and, most importantly, scary.

Doom Patrol (DC Universe, 2019, 15 episodes) – After perking everyone’s ears with an awesome cameo in a Season 1 episode of “Titans,” the world was ready for a full “Doom Patrol” series. The adventures of Robot Man, Elasti-Girl, Negative Man, Crazy Jane, and Cyborg – a group of misfits assembled by The Chief – offered a perfect mix of imperfect, unknown, quirky heroes the world needed.

Better than nearly every other superhero saga on TV or on a streaming service, “Doom Patrol” excels thanks to its daring and creative storylines, downright strange tales that could include everything from interdimensional travel through a donkey’s mouth to a brilliant Nazi scientist who sustains his life by clones and talks through a marionette in his image. It’s weird stuff, which means it’s not for everyone.

The writing is clever and witty but sometimes a bit too much. And while Brendan Fraser is hilarious as Robot Man and Matt Bomer steals scenes as Negative Man despite being wrapped in bandages, April Bowlby’s Rita Farr is completely annoying as the selfish, former actress, while Joivan Wade is completely awful as the spoiled doo-gooder Cyborg. And unfortunately, there’s just not enough of former James Bond Timothy Dalton, who makes the most of what he’s given.

Unfortunately, you will have to endure some clunkers in the 15-episode first season, but if you’re looking for a group of misfit, unorganized, dysfunctional, perverted heroes, “Doom Patrol” should do the trick.

Not Worth Your Time

The Morning Show (Apple TV+, 2019, 10 episodes) – It’s hard to put Steve Carell (“The Office”), Jennifer Aniston (“Friends”) and Reese Witherspoon (“Legally Blonde”) together for a series and fall short, but that’s exactly what the dramedy from the new streaming service Apple TV+ does.

And it’s such a disappointment, particularly after the first show nicely set up what should have been a fun, well-acted, smart look at the Me Too movement on network television.

Instead, the story of the most famous morning show team that comes to an abrupt end because of sexual harassment claims, becomes a droll, meandering mess with plenty of overacting – particularly from Witherspoon – and cliché-heavy writing in an otherwise slick, big-budget production.

There’s not enough of the Carell-Aniston relationship that would be worthy of an interesting prequel. Instead we get some heavy-handed, hard-to-swallow television that is a true disappointment as Apple TV+’s most promising early offering.

Good Omens (2019, six episodes, free with Amazon Prime membership) – As huge fan of Neil Gaiman (“The Sandman”), a great novelist and comic book writer, I was surprised to come across this six-episode series – a collaboration between BBC and Amazon – about an angel and devil who reluctantly come together to stop the end of the world by a baby anti-Christ. After the first episode, I was ecstatic. Not only were David Tennant (“Dr. Who”) and Michael Sheen (“The Queen”) brilliant and funny as the devil and angel, respectively, but the script was creative, original and witty.

But things took a quick turn for the worse in Episode 2 thanks to lazy writing, bad direction, safe decisions and what really seemed to be a lack of strong enough ideas to keep up the pace for six episodes.

So it drags, takes the story in directions with no purpose to just fill time and loses its overall charm quickly. It probably would have been a fantastic two-hour film. It’s surprising that the talents of Tennant, Sheen, Jon Hamm, Michael McKean and Frances McDormand, who is the voice of God, can’t make a Neil Gaiman script be as heavenly as it sounds. Instead, it’s a hellish example of mediocrity.

(If you have anything you want to recommend, please comment or send me an email at scronick@pressofac.com with your mini-review that we will possibly publish in the future! Also, you can listen to the Off The Press with Scott Cronick radio show 4 p.m. Wednesdays for Movie Wednesdays, where Cronick and Kevin Cronin from The Iron Room discuss movies and television on WOND Newstalk 1400-AM, WONDRadio.com and 92.5-FM.)