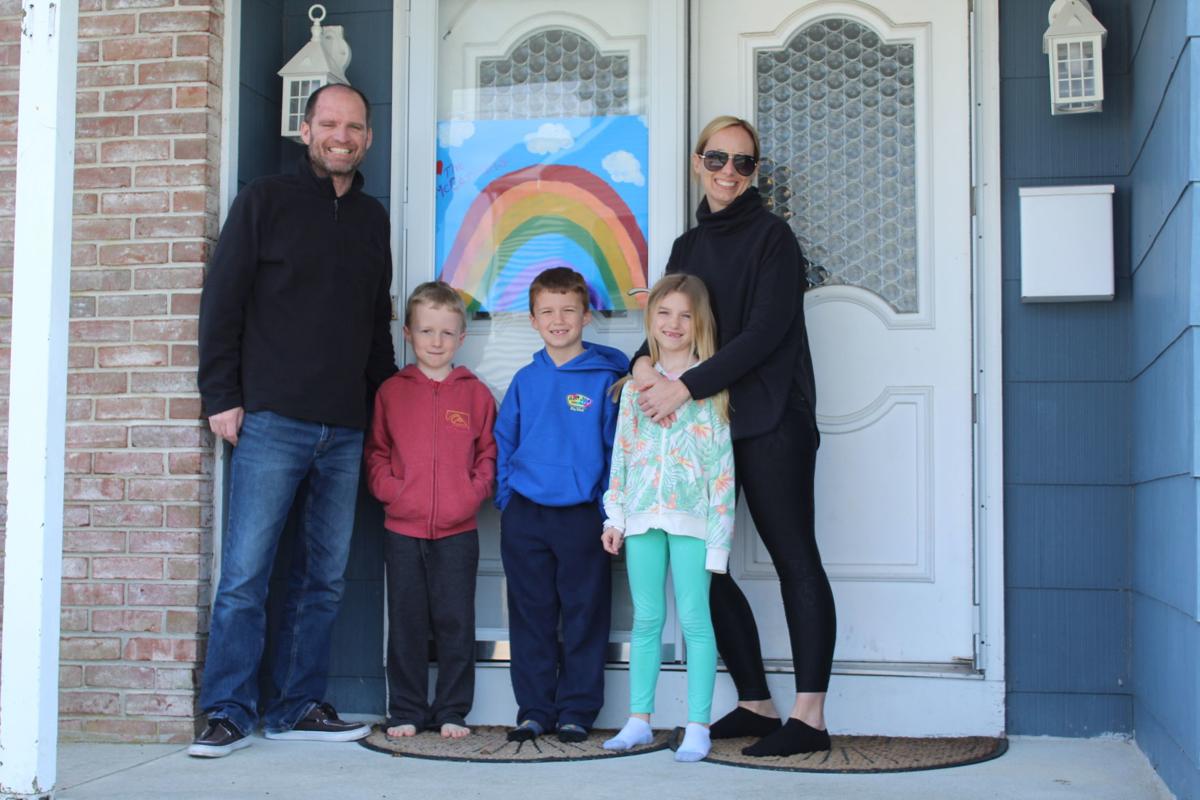 Stacy McCarron, right, is one of three women behind the Ventnor/Downbeach Rainbow Trail, a project in which members of the community post rainbow crafts on their front doors or in their windows to give passers-by and social media followers hope amid the COVID-19 pandemic.

Stacy McCarron, right, is one of three women behind the Ventnor/Downbeach Rainbow Trail, a project in which members of the community post rainbow crafts on their front doors or in their windows to give passers-by and social media followers hope amid the COVID-19 pandemic.

There may be fewer people out on the streets, but the city and surrounding area are getting more colorful thanks to a coordinated effort from some hopeful residents.

Three women from Ventnor — Stacy Bew McCarron, Steph Polinski and Jennifer Langer — started the Facebook page “Ventnor / Downbeach Rainbow Trail” to keep their community connected even when they have to be apart.

On the page, they ask group members to craft rainbows and hang them in their window or front door for other residents to see from the street.

The page administrators hope residents can see a little color if they drive through town or go on walks 6 feet away from others per government recommendation.

“A rainbow is a message of hope, and I just wanted to start from there and keep that alive for our kids here in our community,” Polinski says.

Polinski, a mother, preschool teacher and former art teacher, had seen others creating rainbows on social media and posted a video of one of her two sons painting his own on her personal Facebook page. McCarron saw Polinski’s video, and Langer and another preschool teacher, Hope Bromhead, shared similar posts on Facebook.

Together, the women determined the activity had the potential to grow.

Within three days of creating the page, 300 members had joined. As of Thursday, the group had more than 600 members.

Users share pictures daily to show their rainbow creations along with their street name so viewers know where to look.

“I lost count of how many people have posted pictures, but it’s just so amazing to see,” McCarron says. “The great thing is it’s not only just people with kids ... the older community is doing it, too, because it’s exciting, these children giving them a little bit of a distraction from reality right now.”

We at A.C Weekly jumped on the bandwagon, as well, changing our logo to a rainbow to reflect our support for the movement.

“I love the idea and immediately thought of making our logo the rainbow colors to show our support. Atlantic City Weekly is all about community. It’s what makes us thrive and survive. So it’s really a no-brainer for us to do it,” says Scott Cronick, Director of Entertainment Publications for The Press of Atlantic City.

The trend has expanded well past Ventnor’s borders into neighboring Margate and Atlantic City.

Ocean Casino Resort lit its rooftop ball with the image of a rainbow Wednesday evening at 7 p.m. to support the community effort. The rainbow will stay up on the ball every night for the next several weeks.

“We see our iconic rooftop ball as a beacon of light, and this is a great way to show community support,” says Diane Spiers, vice president of advertising and marketing at Ocean.

Spiers, of Ventnor, said the company encourages other businesses with available signage to do the same.

“I just wanted to make sure everybody knows that we’re all doing this together,” Polinski says. “We’re all going to get through this together.”

For McCarron, there is some gold at the end of the rainbow: She believes the impact will last longer than their stay indoors.

“I think this is bringing the community together,” McCarron says. “I think after this, we’re going to make a lot of new friends.”