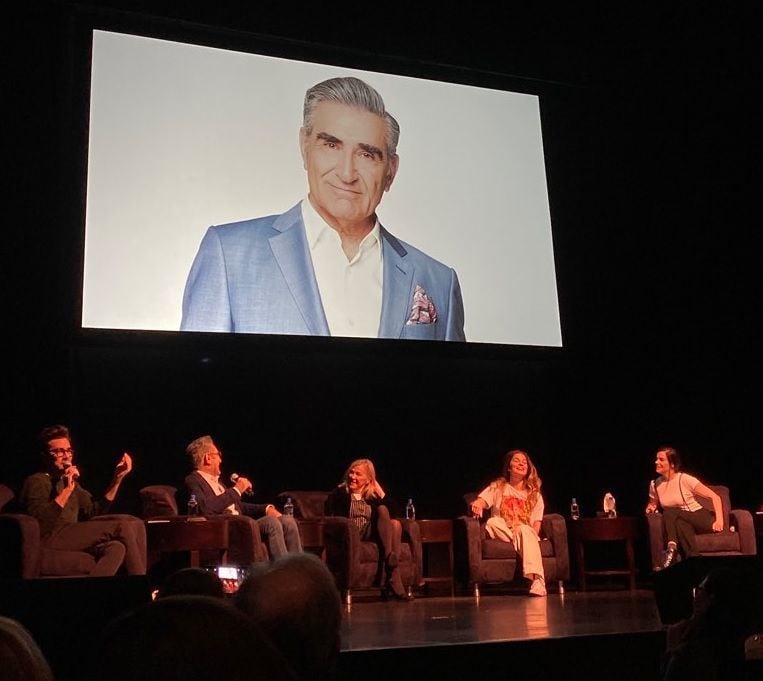 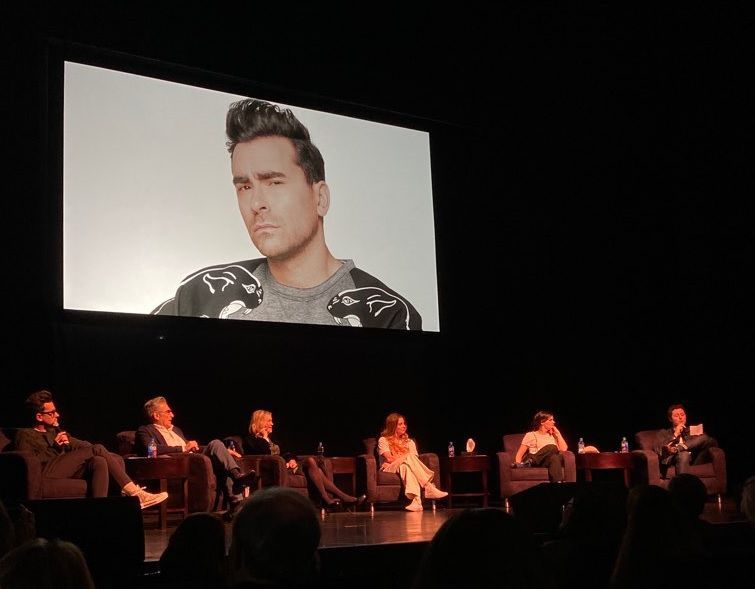 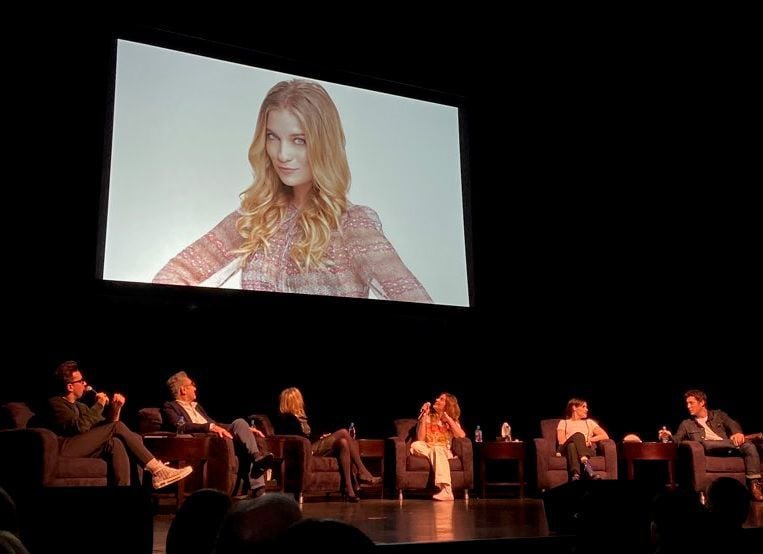 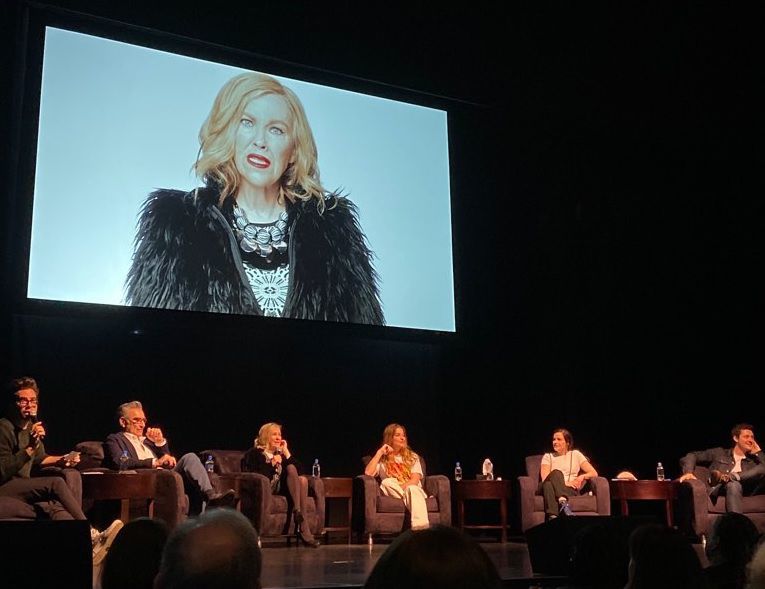 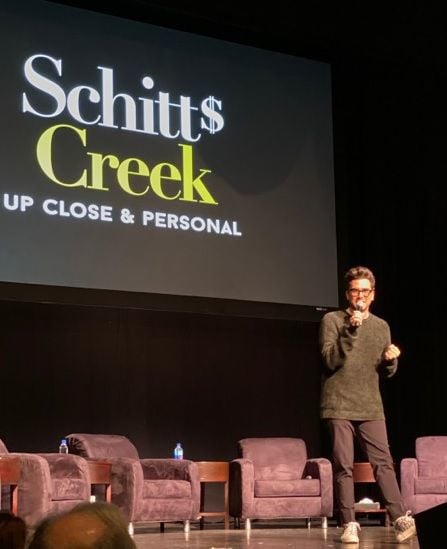 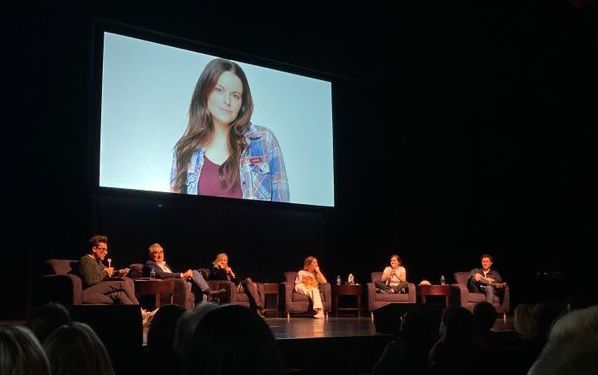 As they walked out to Tina Turner’s “Simply the Best,” stars and co-creators of POP TV's "Schitt's Creek" Eugene Levy and son, Daniel Levy, were met by an electrifying crowd — and the energy of the two men matched. Eugene Levy (Johnny Rose) began by giving accolades to his son for the concept of the show. As the evening's moderator, Daniel Levy (David Rose) individually introduced the rest of the cast members Catherine O’Hara (Moira Rose), Annie Murphy (Alexis Rose), Emily Hampshire (Stevie), and Noah Reid (Patrick) — all of whom were welcomed with cheers as they took their velvet arm chairs set in a semicircle.

Caesars Circus Maximus Theater was the last stop for Schitt’s Creek “Up Close & Personal” Tour on Saturday, Nov. 16, and the night began by celebrating the 40 year comedic friendship and collaborative roles between Eugene Levy and O’Hara ("Best in Show," "A Mighty Wind"), who graced the audience with their hilarious duet “God Loves a Terrier” from 2000's "Best in Show".

Daniel Levy asked break-out stars Annie Murphy and Emily Hampshire where they were in life when they auditioned for Schitt’s Creek. Murphy, who plays ditzy Alexis, described her life as a “smoky, horrifying hellscape.” Her apartment had recently burned down, she had $400 in the bank, and had decided to quit acting. She saw that Eugene Levy was holding auditions and she decided it would be her last go of a career and really just hoped to “at least just meet Eugene.” She noted that Eugene wasn’t even at the audition, it was"just Daniel", which prompted the crowd to erupt in laughter.

Hampshire, who plays the always-sarcastic motel owner Stevie, had a similar story. With $800 in the bank and recently divorced, she says she really has no recollection of her audition. Daniel Levy interjected that after Hampshire auditioned, he thanked her for coming and she immediately pulled the hood of her sweatshirt over her head, rocked back and forth on the couch and said, “That was the worst audition ever.” Though Daniel Levy recommended that no one should ever do that in an audition, he found it charming and knew she was right for the part.

Noah Reid (Patrick) remarked that he had never watched the show before auditioning, which he said still gets Daniel’s goat.

The sold-out crowd was jovial, giddy and engaged. It was like they all knew they were in on the best inside joke. The diverse crowd of parents, couples, and packs of girl and guy friends, revealed that “Schitt’s Creek” is not a niche, it is for everyone. Though for the live "Up Close & Personal" show the cast was dressed as if they were hosting a casual night in with friends, audience members found inspiration in their attire from the characters they played, many wearing fashions inspired by O'Hara's eccentric character Moira, donning black-and-white apparel, statement necklaces and fascinators. Two friends who drove down from the Finger Lakes region of New York were dressed as Stevie the motel manager and the framed elk that's perched on the wall behind her.

During a Q&A with the crowd, an audience member asked if the characters in the show resembled any of them in real life and they each agreed that they all have a little bit of their Schitt’s Creek persona in them.

Daniel showed the audience a montage of bloopers and then went to Instagram to highlight some of the most noteworthy fan art, such as the cast's faces tattooed on the back of a man's calves, the cast represented as rat taxidermy, Alexis' catchphrase “Ew, David” on things like a pie and a welcome mat, and their faces carved into pumpkins. The woman who carved those pumpkins happened to be in the audience and had the chance to banter with the cast about her talents.

"Rose’s Family Feud" was an interactive game that gave five audience members the chance to be onstage and go head-to-head with the cast in “Schitt’s Creek” trivia. One of the audience members chosen was a young boy named Archer who was promptly told by the overly confident O’Hara that she would “wipe the floor with him.”

Though the loveable characters of “Schitt’s Creek” are completely out of touch with reality, they are still so relatable because they're just human like everybody else. Daniel Levy said it best: the Roses are a dichotomy because they are “completely sure of themselves, but riddled with insecurities.”

Reid sealed the evening with his acoustic guitar version of “A Little Bit Alexis” and Tina Turner's “Simply the Best” which he performed in the show last season. The romanticized version of the song had the infatuated audience leaving the theater even more in love with this cast then they were when they arrived.