Jerry Seinfeld’s first Netflix stand-up show, ‘23 Hours to Kill,’ has us excited for what’s next as part of the comedian’s deal with the streaming service.

FILE - In this Nov. 1, 2016 file photo, Jerry Seinfeld performs at Stand Up For Heroes, at The Theater in New York's Madison Square Garden. Seinfeld is suing a California dealer in classic cars, saying the company has left him stranded in a dispute over whether a 1958 Porsche he sold is authentic. The suit comes weeks after Seinfeld was sued by a company that says it bought the comedian's Porsche for $1.5 million only to learn it was fake. (Photo by Greg Allen/Invision/AP, File) 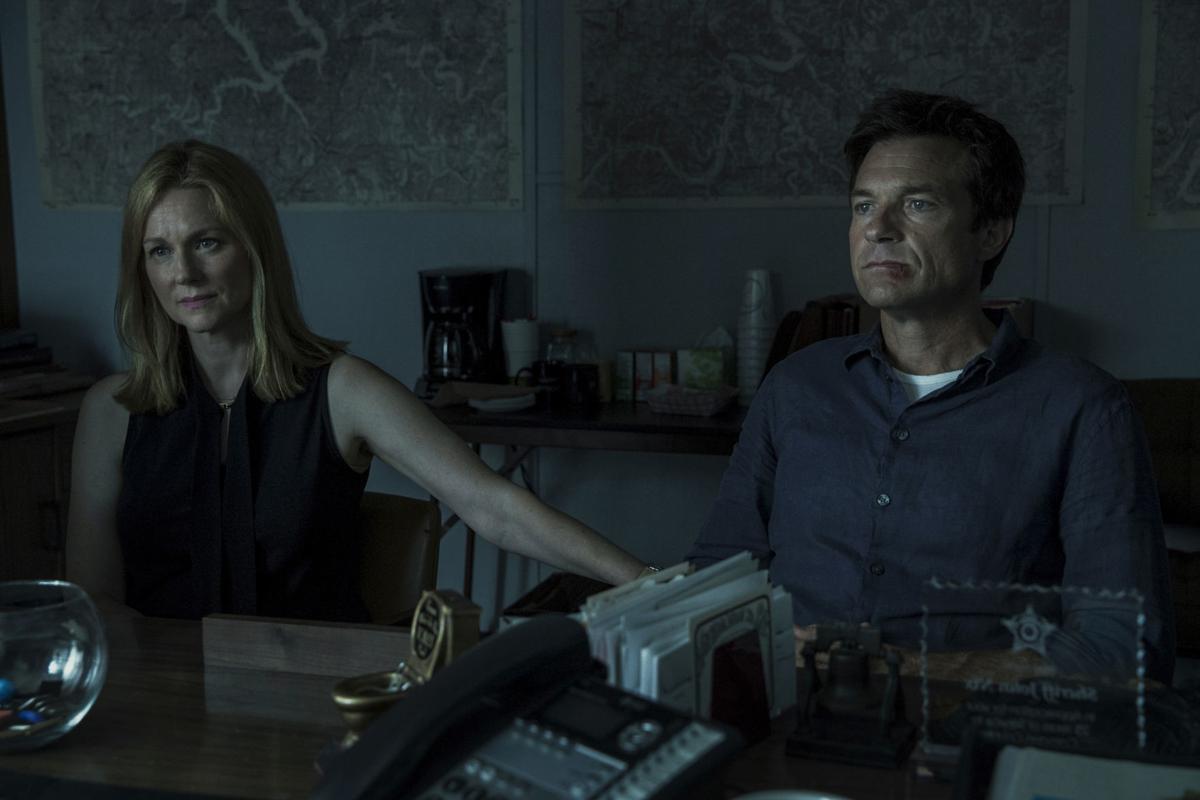 Laura Linney and Jason Bateman star in ‘Ozark,’ which recently released its third season on Netflix, and while the third season is great, it’s tough to sit through the first two seasons to get there.

Linda Cardellini, left, and the excellent Tom Hardy star in a scene from ‘Capone,’ which is available on demand.

Jerry Seinfeld’s first Netflix stand-up show, ‘23 Hours to Kill,’ has us excited for what’s next as part of the comedian’s deal with the streaming service.

FILE - In this Nov. 1, 2016 file photo, Jerry Seinfeld performs at Stand Up For Heroes, at The Theater in New York's Madison Square Garden. Seinfeld is suing a California dealer in classic cars, saying the company has left him stranded in a dispute over whether a 1958 Porsche he sold is authentic. The suit comes weeks after Seinfeld was sued by a company that says it bought the comedian's Porsche for $1.5 million only to learn it was fake. (Photo by Greg Allen/Invision/AP, File)

Laura Linney and Jason Bateman star in ‘Ozark,’ which recently released its third season on Netflix, and while the third season is great, it’s tough to sit through the first two seasons to get there.

Linda Cardellini, left, and the excellent Tom Hardy star in a scene from ‘Capone,’ which is available on demand.

In this week’s Cronick’s Couch, find out if you should watch Jerry Seinfeld’s first stand-up special in 22 years, if Tom Hardy’s performance in “Capone” makes it worth a rental and why “Ozark” is the most overrated show right now.

“Jerry Seinfeld: 23 Hours to Kill” (Not rated, 60 minutes, Netflix) — Jerry Seinfeld is a workaholic. A true craftsman when it comes to comedy, he’s like a professor of laughs, writing and rewriting material every day, attempting to perfect every joke, which he believes could come down to the exact word or exact phrasing to make it funny or unfunny.

That obsessive-compulsive approach to comedy is on full display in “23 Hours to Kill,” Seinfeld’s first original stand-up special in 22 years as part of his lucrative Netflix deal that includes his eponymous hit NBC series, “Comedians in Cars Getting Coffee,” two stand-up specials and the development of scripted and nonscripted comedy programming for the streaming giant.

There’s good news and bad news here for Seinfeld fans. The good news is if you haven’t seen him perform live in more than 10 years, then this will all be fresh, mostly very funny material, an hour’s worth of his trademark social observation that only he can tackle with such nuance and an ability to turn a very cynical way of looking at things into very funny moments.

The bad news is that if you have seen Seinfeld perform live, then you’ve probably heard most of this material, and we all know hearing comedy routines for the second — or third — time is never as funny as the first.

Either way, “23 Hours to Kill” is worth a look as Seinfeld talks about his annoying friends, dining out and rejecting specials (“If it’s so special, put it on the menu.”), his hatred of drizzle on his food (“Maybe if you didn’t reduce it so much, you wouldn’t have to drizzle it!”), how close the words great and suck really are to each other, how his 60s are the best decade of his life, and the always entertaining observations of his family.

Relatable humor and clever wordplay are the key ingredients to his success. Seinfeld’s a joke architect and a student of the craft. And if you have seen his stand-up act live over the years, you have to sometimes wonder whether his attention to detail and obsession with mastering his routine to the tiniest detail hurt him as a comic because he refuses to improvise. Maybe, just maybe, Seinfeld is too rehearsed, an idea he would undoubtedly scoff at.

Consider “23 Hours to Kill” Seinfeld’s greatest-hits package of the last 20 years, which will make his next special really interesting since he has to start from scratch again.

Perhaps no one on the planet enjoys the art of stand-up comedy more than Seinfeld. And that comes out in spades during “23 Hours to Kill.” At one point he points to the stage he is standing on and says it is his favorite spot in the world to be. After watching “23 Hours to Kill,” you will have no doubts that is the case.

“Capone” (Rated R, 103 minutes, for rent or sale on any streaming device or DVD) — If David Lynch was going to make a movie about a mob legend, it would look a lot like “Capone.” ... It would just be a lot better.

If your heart starts to beat fast when you hear that Tom Hardy — one of the greatest living actors — is playing perhaps the greatest known mobster of all time, Al Capone, it should.

The English actor has wowed audiences in both film (Bane in “The Dark Knight Rises,” Mad Max in “Fury Road” and perhaps his greatest role as the title character in “Bronson”) and television (“Peaky Binders” and “Taboo”). He is one of those performers that would be entertaining reading a phone book.

And Hardy is the main reason to delve into “Capone” — a flawed movie if there ever was one — about the last year of the notorious gangster’s life. The Chicago icon is released from prison after an 11-year sentence and spends his last days suffering from neurosyphilis and dementia while living in his Florida mansion.

What transpires is the audience going through a trippy ride as Capone’s brain turns to mush and hallucinations blur his past and present as he battles guilt from the violent acts he performed in his past, alienation and the inability to perform like the man he once was. There is also a throwaway plot that he hid $10 million somewhere on the property but just can’t remember where it is as debtors seize his belongings and prized statues and his world crumbles around him.

The premise is awesome, but writer/director Josh Trank may have bitten off more than he could chew here since being exiled to independent filmmaking after the horrendous flop that was 2015’s “Fantastic Four.”

The writing is the problem here, not Trank’s directing. “Capone” is slow, wastes good actors Linda Cardellini, Kyle MacLachlan and Matt Dillon in supporting roles and just never grips the audience emotionally. On the directing side, “Capone” is an experience, particularly through Capone’s hallucinations and the stunning visuals despite its obviously low budget.

Originally scheduled to have a theatrical release that was pushed to video due to the coronavirus, “Capone” never belonged on the big screen; it’s a made-for-TV biopic if there ever was one, saved by an unforgettable acting performance by Hardy that will make you glad you sat through the imperfections.

“Ozark” (Not rated, three seasons, 30 hour-long episodes, Netflix) — “Ozark” has everything gong for it: a great cast, an elaborate money-laundering scheme, murder, backstabbing, intrigue, drugs, sex, violence ... hell, it even has the Kansas City mafia, if that is such a thing.

What it doesn’t have is enough likable characters to emotionally invest in, enough clever writing to stay attached, nor does it have enough levity to break up the darkness.

Shot through what seems like a filter to make everything look hazy and sullen, “Ozark” could be one of the best series in television today. Instead, it’s a predictable, often boring journey through the lives of people you have nothing in common with who are so evil that it’s impossible to feel empathy for them, which is kind of Rule No. 1 when it comes to writing a crime drama from the antihero’s perspective.

“Ozark” even has a hell of a third season, which was recently released on Netflix, but when you consider that you have to endure 20 hours of mediocre television to get there, I can’t say it’s worth it.

The series follows Martin “Marty” Byrde, played very low-key and almost one-note by the usually amazing Jason Bateman, his wife, Wendy (Emmy winner and Oscar nominee Laura Linney), and their two children Charlotte (Sofia Hublitz) and Jonah (Skylar Gaertner), who suffer the consequences after dad’s money-laundering scheme with a Mexican cartel goes wrong. That forces the family to move from a Chicago suburb to the Ozark mountains, where Marty needs to run an even more elaborate money-laundering operation.

Langmore is a smart and ballsy redneck and one of the main reasons to watch “Ozark” thanks to Julia Garner, who won an Outstanding Supporting Actress in a Drama Series Emmy.

Each character is more despicable than the next. The only people you can really root for here are the Byrdes’ children, particularly Jonah, a complex, intelligent character wonderfully acted by Gaertner, who has really matured through the three seasons as an actor.

For some reason, people like to compare “Ozark” to “Breaking Bad” even though they are not in the same stratosphere. The only resemblance is that they are both stories about money laundering and drug cartels with flawed characters. “Breaking Bad” is one of the best TV shows ever; “Ozark” is one of the most overrated.