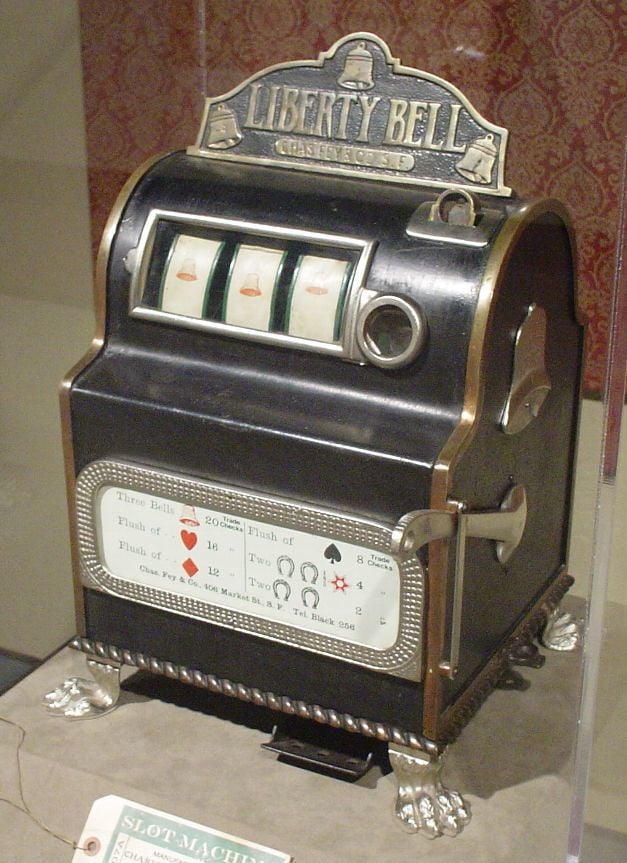 Q. I’ve heard that the really early slot machines didn’t pay jackpots like today, but I was wondering how much of that is inflation. What were the old jackpots worth in today’s dollars.

A. Until technological advances that enabled gamemakers to create big enough odds against winning, jackpots were tiny in the money of any era.

The first three-reel slot, the Liberty Bell in 1895, accepted bets of one nickel and had a top jackpot of 10 nickels – 50 cents. That jackpot came when three Liberty Bell symbols landed on the payline.

A slot machine with a top jackpot of $15.30 isn’t going to draw much player attention today.

Over the decades, manufacturers increased the size of the reels and started using the spaces between symbols as stops to lengthen odds and offer bigger jackpots. But reels still had to fit inside the machines. Even with 20 symbols and 20 blank spaces on each of three reels, the 64,000 possible combinations could support jackpots of only a few thousand coins.

Million-dollar jackpots didn’t happen until Inge Telnaes invented the virtual reel in 1984. By mapping symbols and spaces onto a set of random numbers, game designers could simulate much larger reels to offer longer odds and bigger prizes.

But the old mechanical games such as the Liberty Bell? Their payouts were very small, even with inflation taken into account.

Q. If I understand you right, the five-number bet at roulette on 0, 00, 1, 2 and 3 has a house edge of 7.89 percent instead of the 5.26 on other bets. And you say reducing it to 5.26 would require payoffs of 6.2-1, and that casinos aren’t likely to tie up money by stocking their tables with change to make the payoffs.

That is the kind of thing that could be done easily online, though. Could you see online casinos going to 6.2-1 so all the bets have the same house edge?

Paying that little bet more on the five-number basket bet wouldn’t erode profits by any large amount. It’s not a popular bet among players. Many know that it carries a larger house edge than other bets at a double-zero wheel.

The question is whether there’s enough potential gain to give operators an incentive to make the larger payoff. Would it attract new players? That seems unlikely. As incentives go, “We pay 6.2-1 on the basket!” doesn’t seem like it would raise much excitement.

Would it create good will among those who already play? Possibly.

When changes in the roulette payoff structure are discussed, I always think back to Midwest operator who once told me, “I’m thinking about adding a single-zero table, but I tried it when I was in Atlantic City and it didn’t make any difference. Somebody would complain, “Double-zero is my lucky number!”

But sure, I could see an operator – especially an online operator – being a pioneer and giving a try to 6.2-1 on the basket. Maybe no one would notice. But if it gave even a little boost to roulette wagering, it might catch on with other operators.