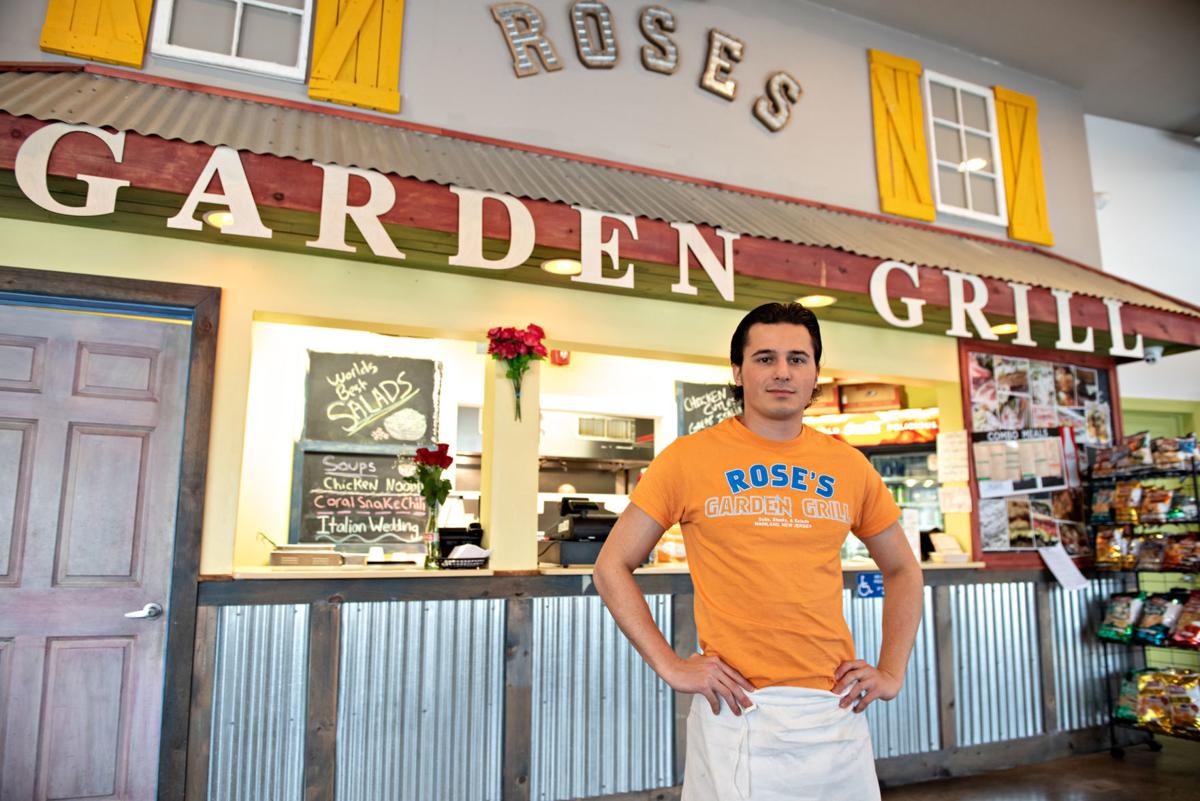 Roses Garden Grill’s second location at The Exchange in Galloway was set to open in April, but do to some unfortunate coronavirus-related timing, they will have to hold off until May. 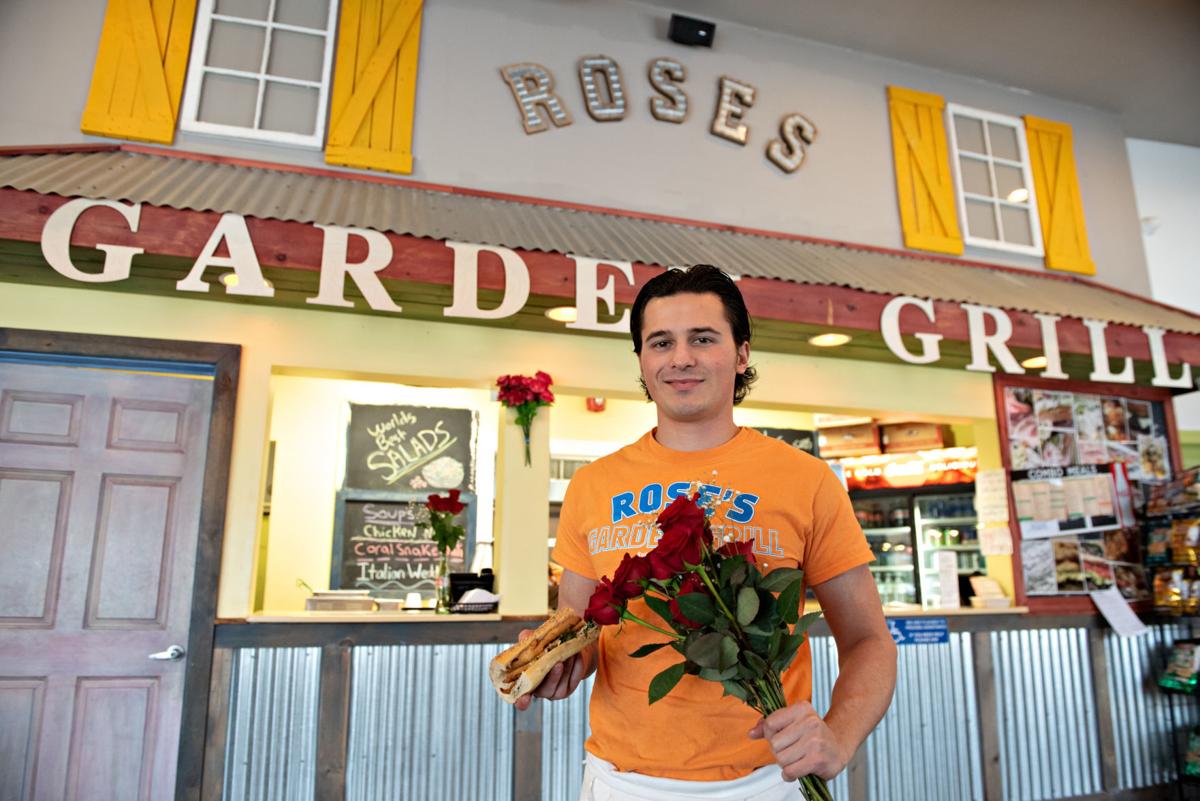 On March 12th 2020, in Galloway, Roses Garden Grill at the Exchange is profiled. Owner Frank Trifiletti. 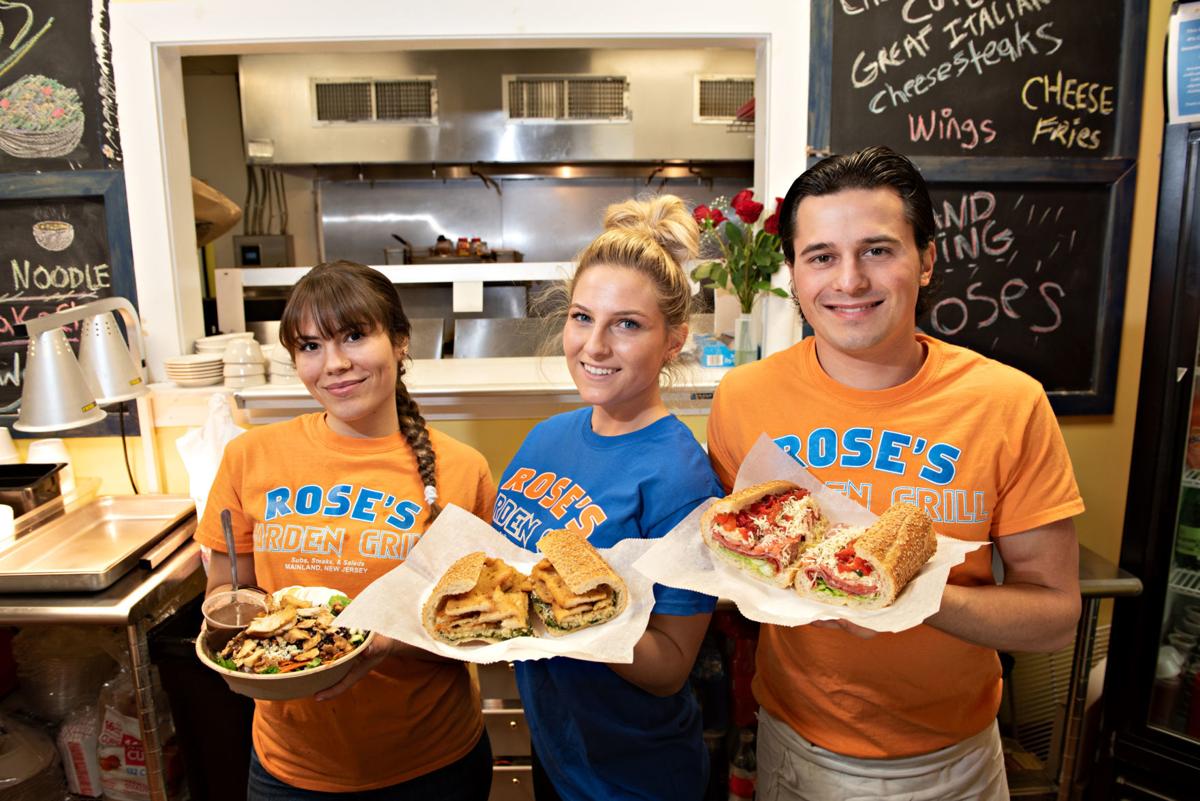 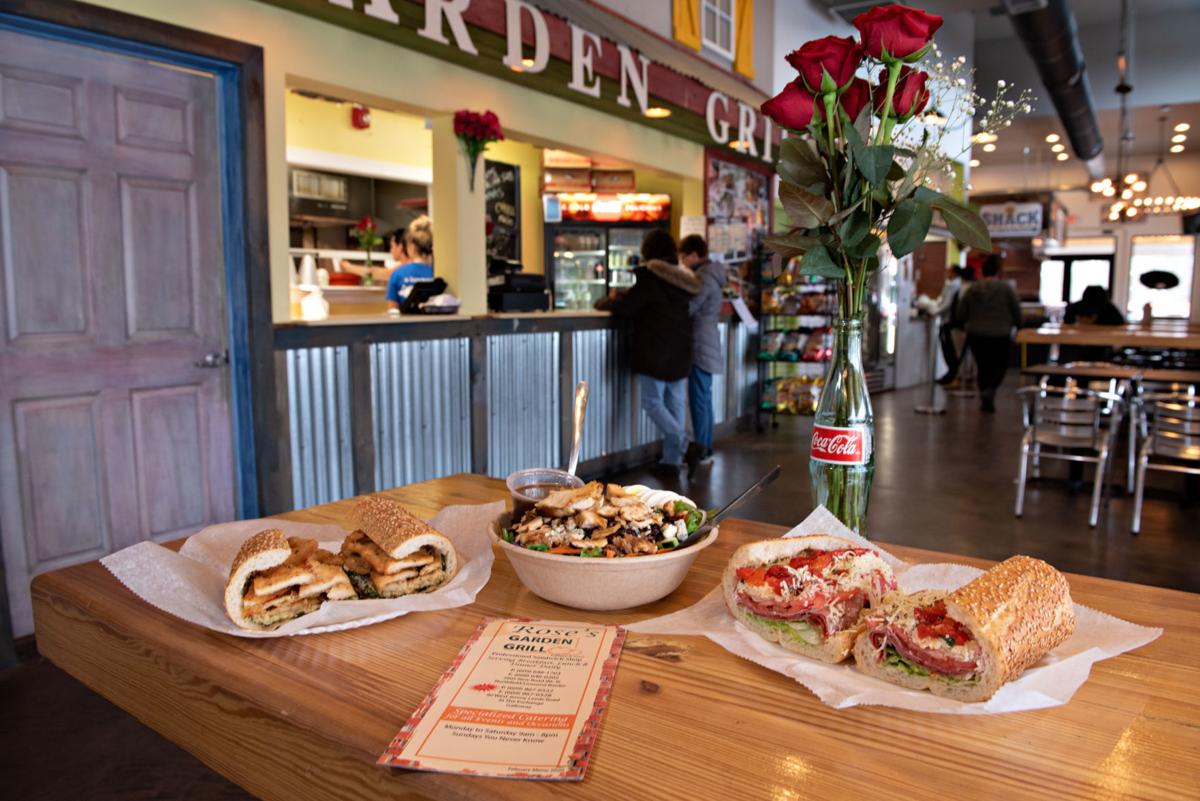 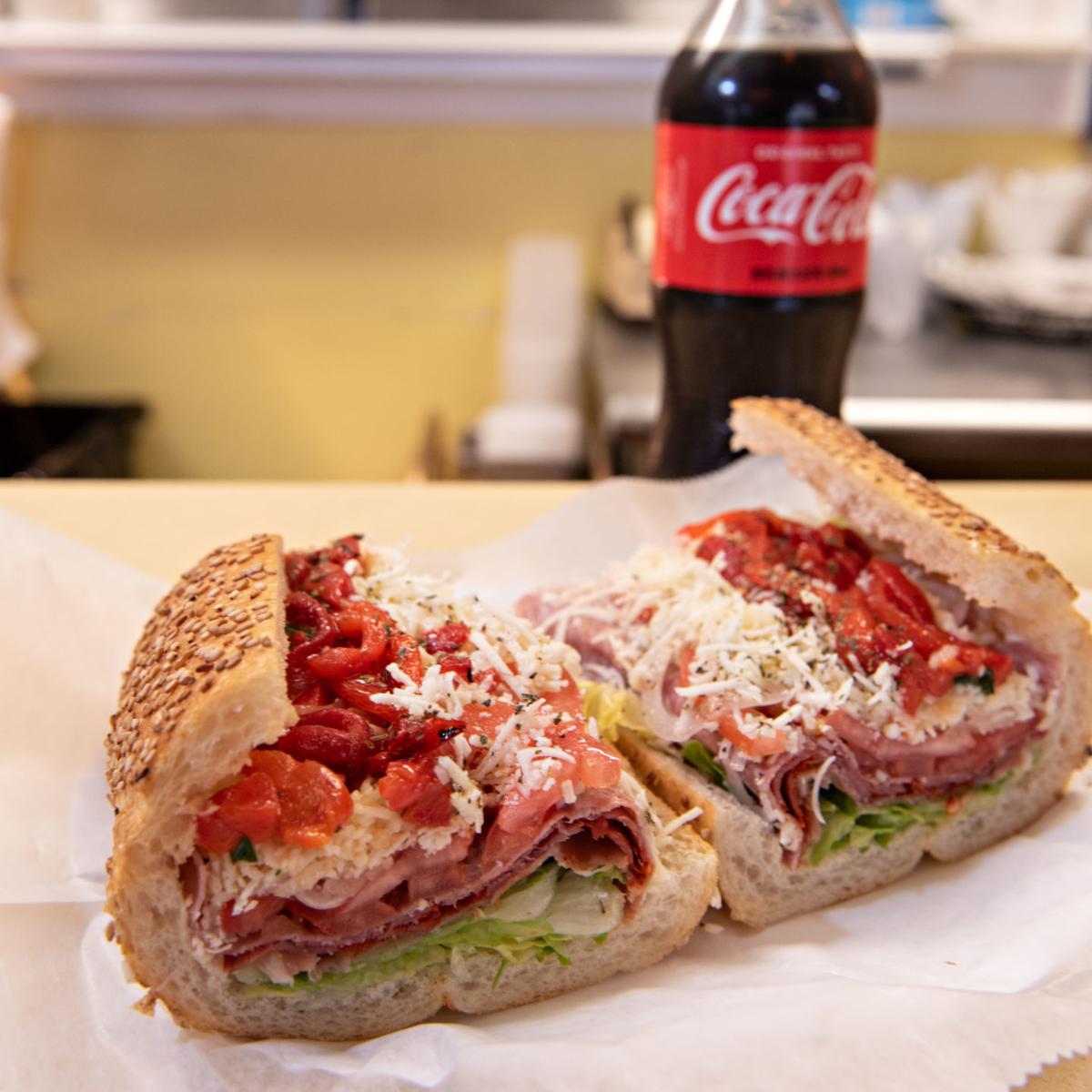 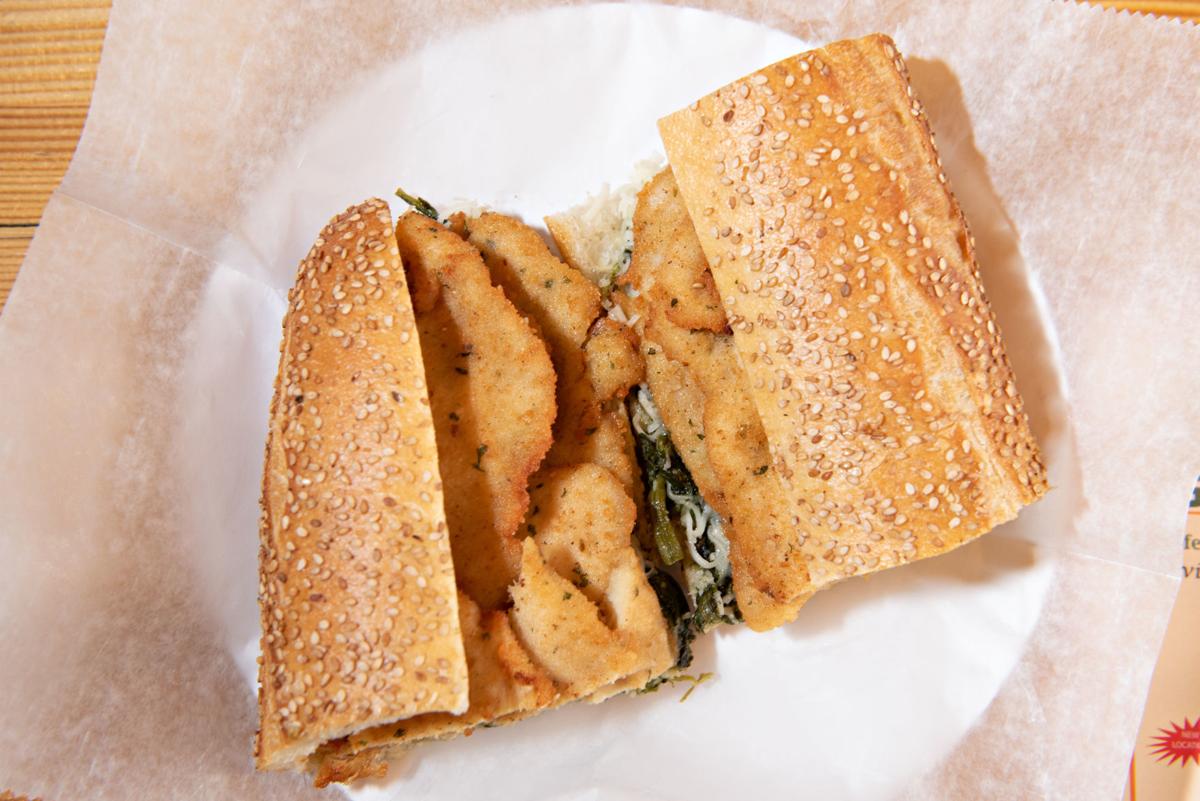 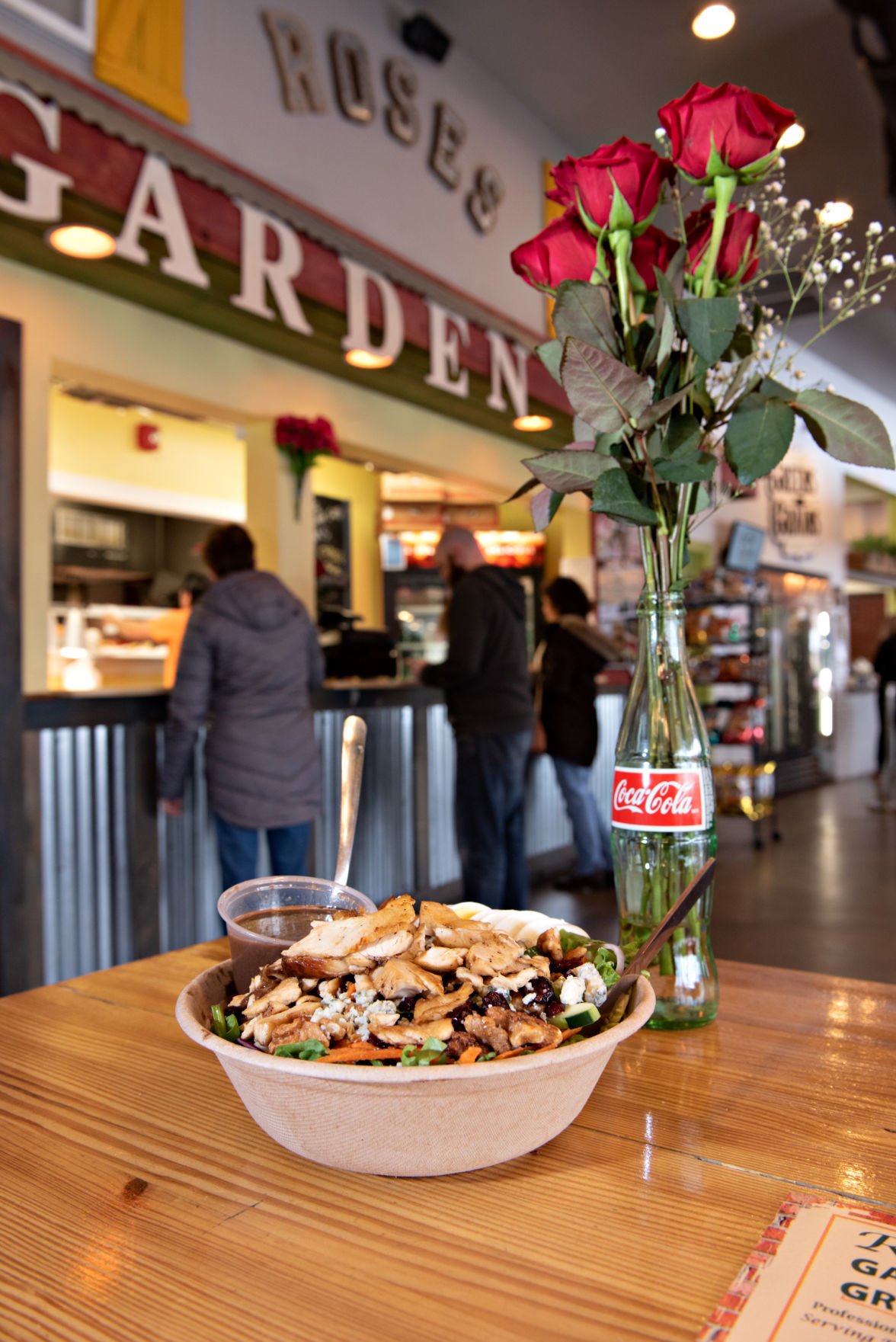 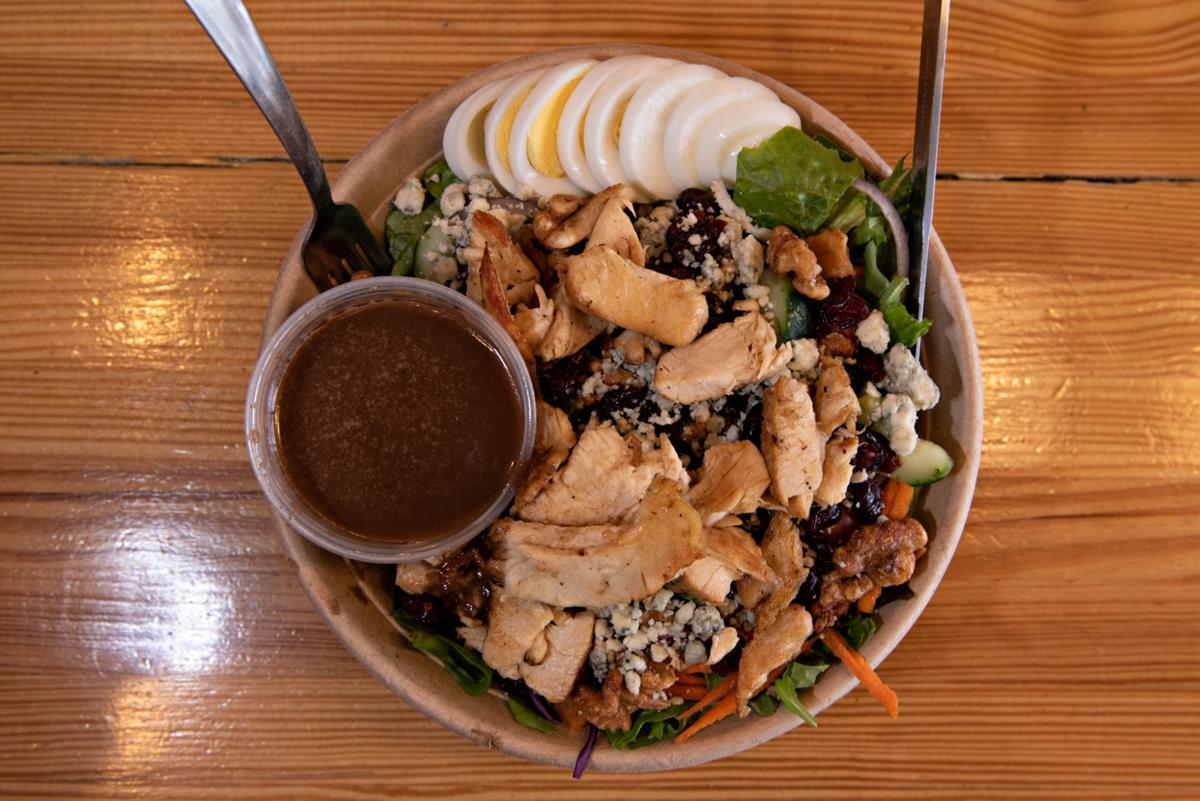 The Enio chicken cutlet sandwich and the South Philly Italian sandwich, left, all make for hearty lunch options, while the Rosa salad, left and below, with grilled chicken, craisins, walnuts, crumbled blue cheese and homemade balsamic vinaigrette is a favorite of Cronick’s mom.

Roses Garden Grill’s second location at The Exchange in Galloway was set to open in April, but do to some unfortunate coronavirus-related timing, they will have to hold off until May.

On March 12th 2020, in Galloway, Roses Garden Grill at the Exchange is profiled. Owner Frank Trifiletti.

The Enio chicken cutlet sandwich and the South Philly Italian sandwich, left, all make for hearty lunch options, while the Rosa salad, left and below, with grilled chicken, craisins, walnuts, crumbled blue cheese and homemade balsamic vinaigrette is a favorite of Cronick’s mom.

If you know Frank Trifiletti, you know that he’s not your average bear. Witty, sarcastic, always moving and grooving, sometimes blunt and always entertaining, Trifiletti is a cross between Rocky and Larry David … and he can make great sandwiches.

His wife Rose is the polar opposite. Soft-spoken, hard-working, thoughtful yet firm, she’s the yin to his yang.

Together, along with their sons Frank Jr. and Nick and a tremendous staff, they make Rose’s Garden Grill tick.

“My wife and I seem different but we really aren’t,” Trifiletti says. “But my wife is serious and I like to be a horse’s ass, and I know that because of how many times she tells me that every day.”

One of the most successful sub shops in South Jersey – walk in there on a weekday morning and you will see stacks of sandwich trays assembled for lunch delivery – Rose’s Garden Grill in Northfield just wasn’t enough for Frank Trifiletti. He has talked about a second location for years, and actually operated a sit-down restaurant – Roman Grill – in Linwood a few years back.

Trifiletti knows few others come close to his product: their cheesesteaks are insane and offer real Whiz if you want it; their chicken cutlets are hands-down the best in South Jersey; they take their Italians very seriously with quite a few options no one else offers; and their specialty sandwiches and items will blow your mind. Even their soups and chili will have you hooked.

So Trifiletti decided to finally pull the trigger and open a second location, this one being in The Exchange in Galloway, where Frank Jr. takes the helm as they hope to cash in on the area’s large population and proximity to Stockton University, AtlantiCare Regional Medical Center, Bacharach Institute for Rehabilitation and many other offices.

But, with the coronavirus, the timing couldn’t have been worse, of course.

“The evolution of Galloway was happening, and how this virus has affected us is real,” Trifiletti says. “When I opened it, it was an offer I couldn’t refuse. There were some unfortunate circumstances with good operators at The Exchange before us, but for us, I knew it was a perfect opportunity. With Stockton, the hospital and the good folks of Galloway, it was a grand slam. Unfortunately, because of the events that have occurred, we cut our hours and now our April grand opening has been postponed to May. It’s one of the craziest circumstances. How everything has changed and transcended in a matter of weeks is just unbelievable. But we will be fine. Like everyone else, we will get through it.”

Luckily for the Trifilettis, their strong suit is takeout and delivery, and they plan to conquer Galloway even in the middle of a global pandemic.

“Frank Jr. is ready,” his father says proudly. “He’s doing great. We have our head chef there – Dago Garcia, who used to be in Northfield — and he is killing it. People have asked for 15 years to open here and open there, and we looked for the right opportunity, and we finally found it.”

“I want to duplicate in Galloway what we do here in Northfield,” Frank Jr. says. “The product is the No. 1 thing. People who know us already are happy that we are over there, and we are wining new people over every day. It’s a great opportunity. We really can’t go wrong there. We love the people of Galloway, we love the landlord, we love the building … it’s going to be a home run!”

When I say everything on Rose’s menu is worth trying, I am not kidding. I don’t think I ever had a single item there that I didn’t like. My only beef may be that I think their Alberto Salsa is sometimes too spicy … but that’s a matter of preference (and also depends who made it that day!).

“There’s a lot that goes into these sandwiches,” says Trifiletti, who opened the Northfield location in 2004 after operating another sub shop, Lil’ Beefs in Glassboro for a number of years. “We hand-cut and hand-bread the cutlets, roast a lot of our own meats, deal with so many cheeses, six different types of hot peppers, fresh bread every day … the result is an exceptional experience every time, and that’s what we do.”

So let’s break it down by menu sections, as I pick Cronick’s Best Of Rose’s Garden Grill Selections.

Start with a soup ($3.50 cup, $4.50 bowl). If grandma said her chicken soup can make you feel better, maybe it will also calm you during these crazy times. The soups, like any good restaurant, change daily. I can say that their Italian wedding soup does their ethnicity proud, their chicken noodle soup is as good as any, and their variations of seafood chowders certainly satisfy. But the one constant is their Coral Snake Chili, filled with a variety of beans, ground beef, chunks of tomato and a decent amount of heat, it is arguably the best chili in South Jersey. Former Food Critic Ed Hitzel used to eat it by the gallon. It’s that good!

When it comes to salads, Rose Trifiletti is the salad whisperer. Loaded with fresh greens and veggies and homemade dressings that include Caesar, balsamic vinaigrette and honey mustard, they can be as simple or as elaborate you wish.

No good sub shop is worth its salt without some good appetizers. You can grab some mozzarella sticks ($6) or a heaping version of onion rings which is a deal at $5, or even some chicken fingers with fries for $8, but there are two things you have to have: Rose’s buffalo wings ($9) are some of the most underrated wings in Atlantic County, whether you get traditional buffalo or the garlic and parmesan; and the Maximus Cheese Fries ($8), my son’s favorite appetizer in the world thanks to crispy fries, real Cheez Whiz – not the fake stuff everyone else uses and says it’s real – bacon and cheddar cheese. They are a heart attack worth having.

Most of the menu is named after customers who frequent Rose’s, so to say that I am upset that I don’t have a sandwich named after me is an understatement. But life goes on.

That said, here are the subs you can’t miss, all made on fresh Rando bread, whether the traditional Atlantic City sub roll or a beautiful seeded Italian.

On the cold side, The Billy Cioffi ($9) boasts hand-cut roast beef that is roasted in house, American cheese, lettuce, tomato, onion; the turkey is also roasted in house for The Sharon Baxter ($9.50) with bacon, lettuce, tomato, mayo and The Greg Alkins with bacon, cheddar, roasted peppers, avocado and chipotle mayo ($9.50); and The Mike Previti ($8.85) is all an egg salad-lover could ask for with 11 herbs and spices.

On the hot side, Rose’s has one of my Top 3 cheesesteaks thanks to its sliced ribeye and the fact that they are one of the only places you can get real Cheez Whiz; Frank’s favorite is The Balboa ($9.15) with steak, Whiz and fried onions, a Philly classic; even though I created the grilled chicken, cheese, bacon and chipotle sauce sub on the menu, they somehow named it The Mike Ryan ($9.15); and the thing I order the most on the menu is The Fleishman ($8.85), a crispy buffalo chicken sub with American cheese and blue cheese dressing.

How many places in this area have a Cuban? Rose’s does, and it’s called The Steve Culligan with grilled chicken, ham, Swiss cheese, Alberto salsa and pickles.

But the secret weapon on the menu is – hands down – The F&L ($9.75) a crazy good buffalo chicken chimichanga that is equally sweet, spicy and scrumptious.

If you’re an early riser and early eater, forget about McDonald’s and get a real breakfast sandwich ($6 to $9). Yes, you can get your typical breakfast sandwiches like pork roll, egg and cheese or bacon, egg and cheese, but Rose’s features real Taylor pork roll, quality bacon and sausage, fresh Kaiser rolls or Atlantic City sub rolls baked that morning at Rando and additions like long hot peppers, broccoli rabe and other goodies to make your morning brighter.

Check out the The Masco with broccoli rabe, egg and cheese or The Tracy Begley with asparagus, egg and cheese for vegetarians out there, but the daddy of all breakfast sammies is The Ole Lee Geiger ($9) with steak, egg, potato, cheese and fried onions.

The Italians and the Cutlets

Not too many places have menu sections devoted just to Italians and chicken cutlets, but Rose’s has so many options, they had no choice.

The chicken cutlets are as big as your head, hand-breaded and fried to order. Rose’s sells more chicken cutlets than almost everything else on the menu for a good reason: They’re awesome. They make you forget about Tony Luke’s. They are that good.

The Enio ($9.50) is a classic presentation with broccoli rabe, spinach and sharp provolone; The Big Nick ($9) is my personal fave with roasted peppers, fresh mozzarella and balsamic dressing; The Matlick ($9.50) is about as good as chicken parm you will find on the planet; and Siggie’s Special ($9.75) is special indeed with prosciutto, sharp provolone, rabe and long hots.

Yes, Rose’s menu is big, which makes it difficult to choose from. Although I heard their half-pound burgers are great, I never had one. But The Mighty Dago ($9) with pork roll, egg and cheese sounds amazing, as does The Clark Shirley ($9) with bacon, blue cheese and buffalo sauce.

There’s a grilled chicken quesadilla ($9.15) and a beef, chicken or steak burrito ($9.15) that I have also not tried, but if they are anything close to the chimichanga, they will satisfy.

“I don’t know if we are better than anyone else,” Trifiletti says. “We love giving people great food. We love hearing people say that’s the best sandwich they ever ate in their life. When they are eating our roasted pork with long hots on a nice A.C. roll that was baked that morning and they are losing their minds … that’s what I love.

Where: 2605 New Road, Northfield, and in The Exchange, 80 W. Jimmie Leeds Road, Galloway

Between you and me: If you go to the Northfield store, you will likely be waited on by Nick Trifiletti. The “monster” outfielder for Stockton University was part of the “Stockton Mob,” five “Italians who were killing the ball” before the outbreak. “Nick was part of a murderous crew of Italians at the plate,” Frank Trifiletti says. “It’s a shame their season ended.”