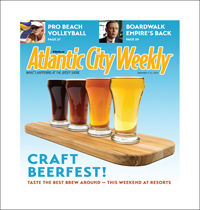 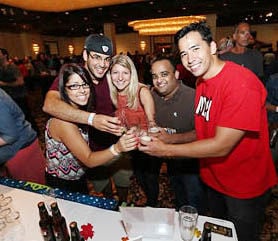 Between the razzle-dazzle of the casinos at one extreme and the minimalist joy of the beach at the other, Atlantic City hasn’t traditionally screamed “sophisticated beer town” to most visitors. But that’s history. Today, regional brewers and local beer enthusiasts — not to mention this week’s second annual Craft Beerfest at Resorts — are aiming to change that.

Gene Muller, president and founder of Flying Fish, the Garden State’s largest craft brewery, says the changes to the city’s beer scene have been difficult to miss. “When we first opened [in 1996], there was not much craft beer presence in Atlantic City,” Muller says. “It really wasn’t in the bars and casinos. In recent years that has really changed. People are seeking a better experience.”

On Saturday, Sept. 6, beer enthusiasts from throughout the region will be able to get a taste of those changes at Resorts, when a wide selection of breweries will be pouring dozens of their best brews.

Breweries slated to be pouring include Dogfish Head, Victory, Oskar Blues, Troegs and several others. New Jersey will be well represented, too, with brews by Cape May Brewing Co., Flying Fish, Tuckahoe Brewing Co., River Horse and others on hand. In total, more than 60 beers will be available.

Drawing that kind of beer power is a dramatic change for a city that just a few years ago lubricated itself on complimentary cocktails hastily consumed in front of slot machines.

Kyle Williams, co-owner of three Atlantic City establishments known in part for their beer — Back Bay Ale House, Scales Grill and Deck Bar, and Vagabond Kitchen and Tap House — says these big beer events are good for the city as a whole, especially if your establishment has good craft beer on draft.

“If you have any decent craft beer people will find you,” Williams says. “Beerfests for us are huge. They fill the restaurant.”

Williams and his wife, Jane, who co-owns the restaurants with him, says an array of factors have led to Atlantic City’s growing craft beer scene. Events like the Resorts’ Beerfest and the Atlantic City “Celebration of the Suds” Beer and Music Fest, which is going into its 10th year next spring and draws some 50,000 visitors, are certainly big factors because they bring people into the city for experiences other than gambling. Beer-focused events at Atlantic City restaurants have been a contributing factor, too. Dinners featuring brews by craft beer favorites Dogfish Head held this year at the Continental and the Back Bay Ale house are examples of that.

And then, of course, there’s the emergence of local breweries. “For South Jersey, what’s really made a difference is the rise of Cape May Brewing and Tuckahoe,” says Williams.

Tuckahoe Brewery, located in Dennisville, and Cape May, out of (where else?) Cape May, each opened quite recently — and quickly drew accolades in a state starved for good locally brewed beer. Both will be pouring at the Resorts Beerfest.

But then, the country as a whole is starved for something other than the yellow fizzy lager we used to chug in dorm rooms.

While the beer industry considered in its entirety may be losing ground to wine and spirits — beer’s share of the alcohol market has slipped from 56 percent to 49 percent since 1992 — the craft segment of the beer world is in the midst of a boom that shows no signs of slowing down. We’re talking big, Neil Armstrong-magnitude strides. Last year, the craft market grew by just over 17 percent, part of a trend of double-digit growth that has last five straight years. There are now over 3,000 breweries in America — the highest total since before Prohibition. (So many, in fact, that Dogfish Head founder Sam Caligione recently told Bon Appétit an “incredibly competitive” time for craft brewing is on the horizon. “There is a bloodbath coming,” he warned.)

In any case, events like the Resorts Craft Beerfest and dozens of others held throughout the state are proving to be invaluable ways to reach drinkers who are discovering that beer is a lot richer, more complex and intriguing than they realized. That has certainly proven true for Muller and the folks at Flying Fish.

“They [craft beer fests] are our biggest marketing expenses,” says Muller. “You’re not going to see us running a commercial on the Super Bowl. The best way to introduce your beer to people is to let them try it. Most people really want to learn, so it’s really great. It’s a no-risk way to try a beer.”

The second annual beerfest includes live music by the band My Hero Zero, food intended to be paired with beer, and contests and prizes throughout the afternoon.